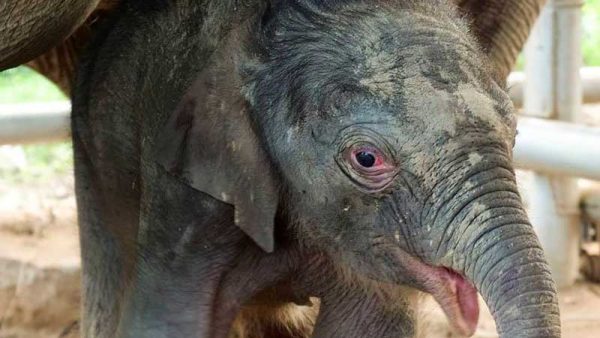 A Sagittarius baby-boy-elephant was born just before the strike of midnight, under the last full moon of the decade and on auspicious Friday 13 December. A pretty lucky day for a trunked-boy to be born. The moons phase intensified feelings of love; this is undoubtedly true when Somboon introduced him to the Samui Elephant Haven tribe and the world.

Sagittarians are typically charismatic and live life on the edge! On his fourth day, he found his running legs and started mimicking his mum; if elephants could roll their eyes, Somboon would be doing just that with fondness! Already, he’s a cheeky chappy who loves to be the centre of attention which is just as well as the entire world is watching his antics with love, wonderment and laughter.

This is the first elephant to be born on Koh Samui that will not have to endure any riding, entertaining or street begging activities; he will live out his life with Somboon and his big sister Nong Pech. Maew, the founder of the Haven hope that within the first month he will be introduced to the rest of the herd that consists of two nannies Sri Nin and Sudurat, his sister Nong Pech, Kwan Samui and Moloair. There is already lots of interest from his herd, so much so that the ‘nannies’ want to borrow him!